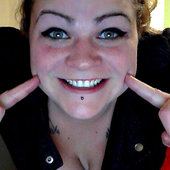 Have a Beautiful Day <3

Shoot me an email or give me a call if you need any help!

Get to know Kristi Knutson

This is an edit I'm making to my profile for a test! <3

Before I started working here as a blog trainer in October 2010, I thought blogging was a petty update of peoples' lives. "Today, I switched from Crest to Colgate." "Today, my dog did the CUTEST thing." "Today, my boyfriend brought me a frog." Now, I have learned directly from an amazing blog trainer to be a pretty darn good blog trainer myself; and that myth has been kicked to the curb.     If you need any help navigating the site, writing your blog, or just feel you need guidance in the right direction, please email or call your friendly neighborhood blog trainer . (That's me!)

bookmark_borderbookmark
Just for Fun – over 5 years ago

bookmark_borderbookmark
Just for Fun – over 7 years ago

bookmark_borderbookmark
ActiveRain Community – over 7 years ago

Happy Fourth of July! We'll see you on Monday!

Singing in the Rain, under my Umbrella-ella-ella :)

I've lived in Seattle since I was three, so it's the only home I've ever known. Of course, I've visited many other states, and have come to the conclusion that Seattle is where I belong. By now I'm sure Seattle is in my blood. I've spent countless hours navigating the streets by bus, on foot, or by car.   After graduating High School, I went to college for Psychology - though I also dabbled in languages. I took several English classes (which was really, the only schooling related to being a blog trainer !), as well as a quarter of Spanish, French, German, and Japanese - just for fun. As far as jobs go, I worked at Brown Bear Carwash (a Seattle started company.. I've known the CEO since I was born!) and Blockbuster (man, I don't even WATCH many movies..)! Being a blog trainer has been my favorite job thus far!   (Yes, even taking the free rentals into account.)