Fishhawk Lake Home Search and Community Lifestyle I am a REALTOR®  with John L Scott Market Center specializing in my slice of paradise, a private lake community in the coastal range of Oregon called Fishhawk Lake Reserve and Community, located in Birkenfeld, OR.  Having lived here for 17 years, and a REALTOR® for more than 15 years,  this affords me the opportunity to be your local expert.   I feel well-equipped to share my enthusiasm and local expertise  about vacation or full time living when it comes to one of Oregon's Best Kept Secrets!

This breathtaking lake is home to  osprey (fishhawks),salmon, trout, elk, deer, cougar, eagles, otters and many other critters that abound in and around the lake.  There is hiking, boating, swimming, birdwatching, even mushroom hunting!  We have the 2nd tastiest water in the state and some of the freshest air you'll ever breathe.  There are approximately 180 homes and over 300 lots that are on the lake itself or surrounding it.You can find the rustic weekend getaway or the home with five fireplaces and a theatre that holds about twenty people at a time.  The variety of homes and personalities is very eclectic.

Many social events, friendly neighbors and nature nature nature! More people are looking to live full time when they can work remotely from home and our taxes and prices are much lower than in the city of Portland and the surrounding urban areas.

Check out my website for listings and more photos: http://www.lakehomesatfishhawk.com/

My husband and I gave up the urban sprawl, sold our home in five hours in a suburb of Portland and moved out about 90 minutes from Portland, OR. and an hour from the coast into our 2nd home, at Fishhawk.  It was a dream come true--literally as we had put this plan on paper a few years before.

It is truly heaven.  We are a community that waves at one another even if you don't recognize the person, watches over each other's property and have progressive parties like Dock Crawl and Cabin Crawl two times a year, plus many social events for all family members. Check out my blog for all kinds of ideas on what to do out here, what trends there are in real estate--so much information--even where to go to find a local lender or home decor...I've shared it all.  Here it is:http://fishhawklakerealtor.wordpress.com.

Let me be your local expert. Call or write, plan a trip and I'll give you the grand tour and show you whatever strikes your fancy.

My Canoe Trip on Fishhawk Lake

Take a quiet ride to view Fishhawk Lake one spring. You'll want to come and see it in all seasons as it's ever changing! Vacation or fulltime--Fishhawk Lake is a secret paradise! 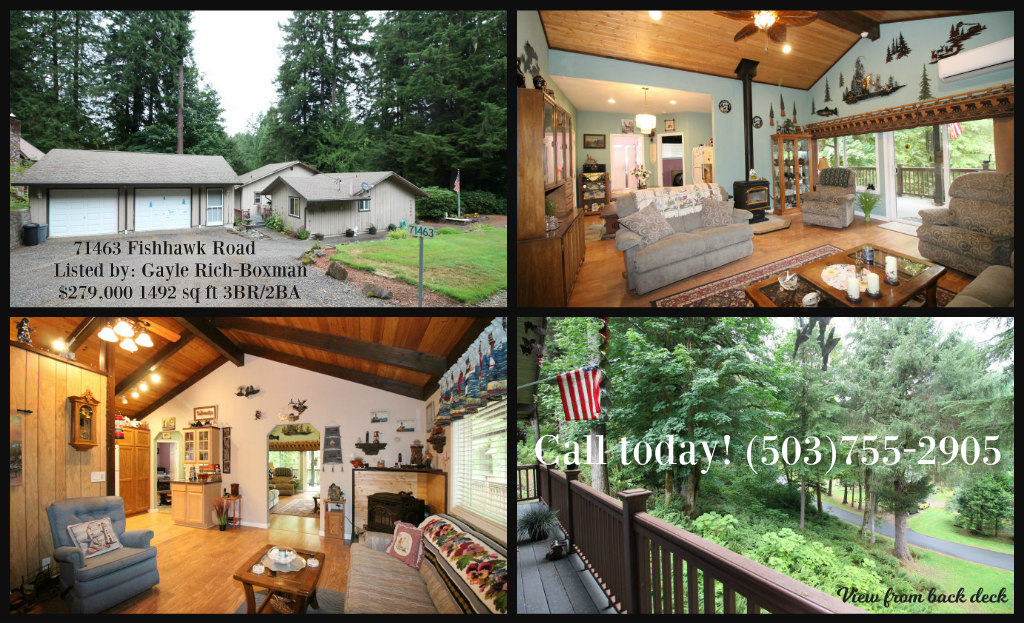 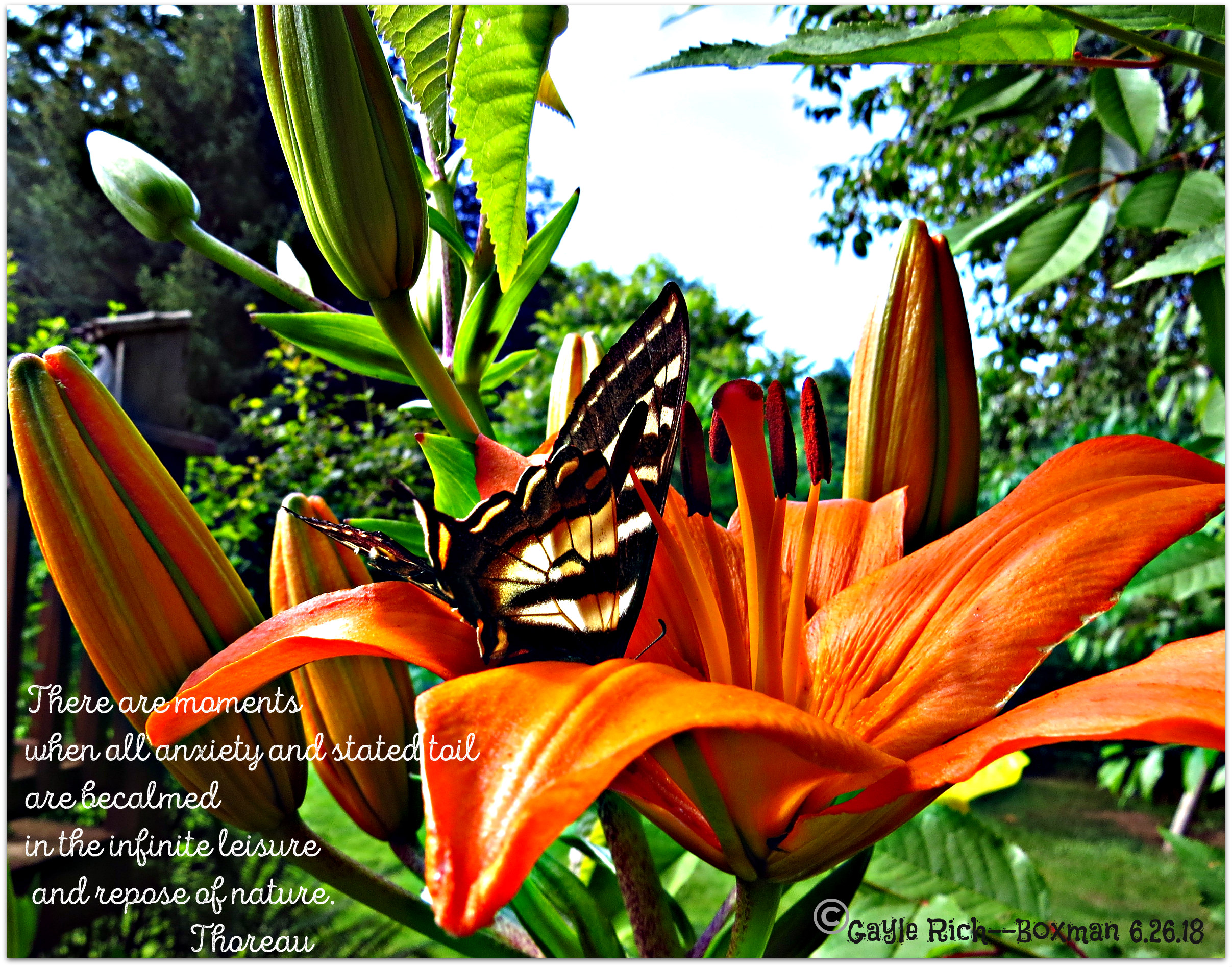 Just for Fun over 2 years ago
bookmark_border
Foto Friday Happy Spring Everyone!

Real Estate General Information over 2 years ago
bookmark_border
Fishhawk Lake is NEAR the Oregon Coast! 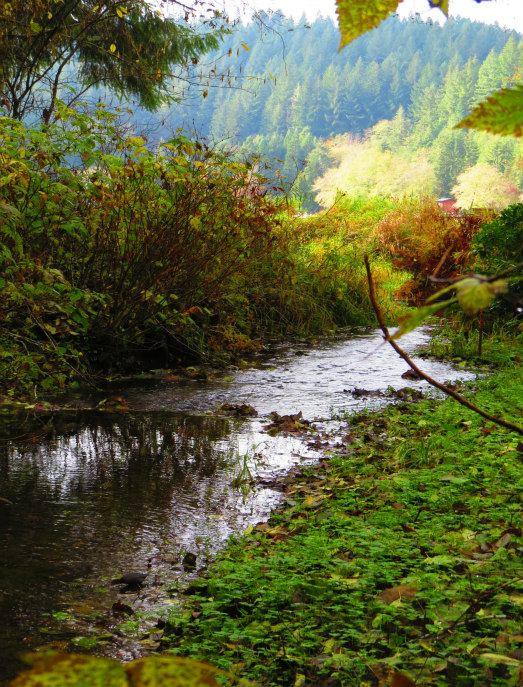 In my place on this planet in the last 50+ years I've worn many many hats. I have a BFA in theatre and did television, film and print for several years...had a live talk show called Cityscope, locally produced for a FOX network affiliate back when FOX was just a youngster. I've worked in advertising and radio, too.

I had a petsitting business called Pampered Pets long before it was so popular....I was ahead of my time, but behind on the money, so had to let that go after a short lifespan.

For several years, I was an artist and had my own wearable art business called Richworks. Loved it!  It was quite labor intensive but the last year I did it, my work was in Nordstrom, Norm Thompson and various boutiques in Portland, OR and at some resort communities on the coast.

Then, I got a "real job" (as my dad used to put it) in the healthcare field, specializing in Long Term Care and worked in that for ten years, the last four years working for Apria a national respiratory care company.

Your Local Expert! REALTOR® for Fishhawk Lake Real Estate™,serving the community I live in, nestled in the coastal range of Birkenfeld Oregon for 15 years!