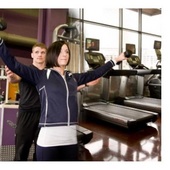 Realtor trainer & owner of Anytime Fitness. When the mind and the body are in peak condition the world is your oyster.

Get to know Chuck Roberts

Thanks for checking this out.

I’m Chuck Roberts. I own an Anytime Fitness in Hoover, Al and am the team leader of Keller Williams Realty in Monroe, La. My ears stick out, and I have no hair. My wife is the most beautiful thing on earth, inside and out. We’ve also got a two little boys who have brought a whole new meaning to both “joy” and “patience.” I’m from Columbia, La. originally, so please pardon the grammar (I will be using y'all & fixin to).

This blog is ever-evoloving, as am I. If you’re a marketer, especially in a small business environment, I think you’ve found a pretty useful resource. I aim to inform, inspire and engage both about real estate & fitness.

Shoot me an email at anytimefitness@yahoo.com, or just leave a comment.

bookmark_borderbookmark
ActiveRain Community – about 11 years ago

bookmark_borderbookmark
Thought Leader – about 11 years ago

Tame the Bulge in Hoover, Alabama

bookmark_borderbookmark
ActiveRain Community – about 11 years ago

Keller Williams Realty comes through for its Louisiana agents once again

Looking for a gym in Birmingham, Alabama?

Chuck's first full year in real estate was 2004. The year proved to be especially challenging for him due to the fact that he was a Realtor in Lake Charles, LA, for the first 5 months of 2004, moved to the Monroe area in May and had to start over with no clients. But the year ended with Chuck being named the local Century 21 Rookie of the Year and top agent by units sold.

In 2005, Chuck was invited to join Coldwell Banker Group One Realty where he once again became one of the top agents. Midway thru 2005, a friend gave Chuck the book The Millionaire Real Estate Agent by Gary Keller, co-founder of Keller Williams Realty. This book totally changed Chuck’s life. Instead of trying to do and be everything to everybody, Chuck learned to look at his profession as a business instead of a way of life. This catapulted him to a whole new level. By the end of 2005, Chuck had the #1 team in the area and held onto the #1 position until he sold the team in 2007. In 2006, Your Team Realty LLC sold $10 million in real estate with Chuck spending about 2 to 10 hours per week training, leading and motivating the team members.     With all the spare time on his hands, Chuck decided to buy a few properties for himself. In 2006, Chuck and his brother Avery formed Versa Properties LLC and bought more than 50 properties together.  The value of these properties totaled about $5 million. They sold 20 or so properties for $2.5 million. Total volume bought and sold personally was $7.5 million in 2006. When you combine that with what the team sold, the total volume sold for 2006 was $17.5 million. He did this while working very few weekends or evenings and never missed any of his sons’ ball games or practices!     Needless to say, Chuck fell in love with the Keller Williams systems and models because it allowed him to make a very good living and still have a life. When the opportunity to open a Keller Williams Market Center in the Monroe area came up, Chuck jumped at the chance to be involved. He had seen firsthand what a tremendous change this philosophy could make not only in his life, but also in the life of his fellow Realtors who he had seen struggle with the same issues that had plagued him until he found a better way of doing business.     Keller Williams Realty is cutting edge when it comes to training, supporting and helping agents make a paradigm shift in the way they treat their business which usually flows right into their personal lives. How can you go wrong with a company that puts its values in writing as God, Family, and then Business?     If you would like to know more about Keller Williams Realty, please contact Chuck Roberts at 318-372-4825 begin_of_the_skype_highlighting              318-372-4825      end_of_the_skype_highlighting, or you may contact any of the great agents associated with the Keller Williams Realty Monroe Market Center at 318-396-2475 begin_of_the_skype_highlighting              318-396-2475      end_of_the_skype_highlighting.  Having fallen in love with the Keller Williams Realty franchise, Chuck decided to search for an additional franchise to open.  He found a great one with Anytime Fitness.  After researching long and hard he decided to open an Anytime Fitness in Hoover, Al where his brother could help him run things.  If you are interested in getting fit you will love Anytime Fitness.  It is perfect for the active Realtor.  It's open 24 hours a day, 7 days a week so you can work out around your busy schedule.
Languages (1)